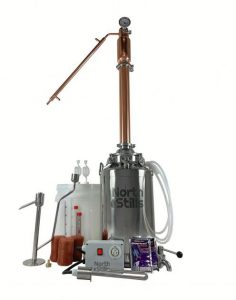 Distillation is a well-known technique in chemical analysis for characterizing materials from an index of purity and separating their content. This technique is even more widely used in the manufacturing industry and preparative chemistry to purify products and chemicals. However, distillation operations can vary enormously in size and process complexity.

Numerous quoted standard specifications refer to distillation ranges as criteria of purity or suitability for use or as performance indicators. A flask, distillation head, condenser and sample collector is the key to a simple distillation laboratory.

Our equipment is highly functional and efficient as it is aesthetically pleasing. We offer a wide range of pot stills, reflux stills, flute columns, and just about everything to make world-class spirits.

Whether you want to create your own essential oils, learn a bit more about chemistry and physics, our distillations kits get the job done.

Distillation is the process that occurs when a liquid volatilizes to produce vapor that becomes subsequently condensed to a richer liquid. It is represented at its simplest when steam comes out of a kettle and becomes tiny drops of distilled water.

Distillation is used to separate liquids from nonvolatile solids. The volatilization process involves heating liquids to separate two different materials, such as the separation of gasoline or lubricating oil.

Most methods used by the distillation industry are variations of simple distillation. The initial operation requires a still where the liquid is heated, a condenser to cool the vapor, and a receiver to collect the distillate. This simple method is satisfactory for purifying liquid with nonvolatile material and is adequate to separate liquids with diverging boiling posts.

So maybe your guilty habit is daydreaming about home distilling your alcohol but are you ready for the challenge? It can’t be much more complicated than making beer.

For one, despite its growing popularity, home distilling is illegal in most areas so refer to your local regulations. But, much like home brewing became a gateway for future microbrewers, a lot of the leading proponents of the ever-increasing artisanal movement have small-batch home distilling kits.

Is it something that peaks your interest? So let’s begin, what’s important to understand before you set up shop.

Always refer to your local laws when it comes to distilling, then you’ll need to buy some equipment. First, you’ll need a still, which is generally quite expensive, though it can be built inexpensively. A good-sized hobby will run around $300 and more. The still is essentially your heat source to boil the fermented liquid and a cold water loop to create a chilly surface area inside the still to create steam, condense and collect.

Beyond that, you’ll need everything you would typically need to brew beer or wine, including stockpots, carboys, big plastic tubs, grain, yeast, and other ingredients. The last step is the still; while it comes in all kinds of configurations, the simplest still is the best.

Once again, North Still looks forward to helping its customers find the most suitable system for these needs. There are many types of equipment that you can use and many different processes, but all of them have a thermometer to facilitate the process.

This package comes with 50-liter stainless steel boiled with a fitted 3’’ copper reflux tower, thermometer, and butterfly valve drain. We provide two 30 little fermenting pails with lids, rubber dungs, and plastic airlocks to maximize the purification of liquids. In addition, the heating element goes up to 1750 watts to reach the various boiling points. Other features include two packages of turbo yeast, a vinyl hose, gear clamps, and a gravity hydrometer.

The prestige series 600-liter steam jacketed whiskey still is an ideal piece of equipment for commercial production of whiskeys, brandies, and rum. This machine includes a 150-gallon operation capacity stainless kettle with a 14’’ clamp down manway. The copper column is integrated with four plates and is8’’ in diameter. In addition, we offer a comprehensive 8’’ shotgun condenser with a stainless proofing parrot to maximize capacity.

This 4’’ diameter modular flute column with six bubble plates is placed on a 100 liter double-walled boiler. This unit can heat up to 5,500-watt elements into the chamber. Its conception allows for even heat distribution inside the internal kettle to allow safe distillation without risks. Works well with liquid washes, solid rain mashes, and fruit macerations.

Michael C. Brown | InsideHook (Nov 24, 2020). Home Distilling Is Illegal but Here’s How to Do It Anyway
https://www.insidehook.com/article/food-and-drink/home-distilling-is-illegal-but-heres-how-to-do-it-anyway