Why Is Moonshine Illegal

In recent years, moonshine has been enjoying some sort of a come-back.  Even the Discovery Channel has taken advantage of moonshine craze with the popular TV show ‘Moonshiners’.  This show has succeeded in hyping illegal moonshine, compelling fans to buy their own home distilling equipment and supplies to make their own moonshine. However, think again before making moonshine at home.

The production of any spirit (including moonshine) without proper permits is illegal. Remember to check your state laws when distilling any alcohols. 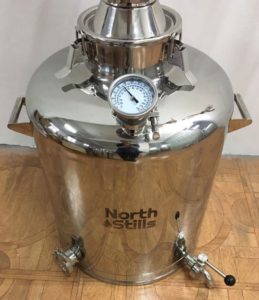 So Why Is Moonshine Illegal?

It is legal to own moonshine stills, and you can actually use them, provided you are not producing alcohol. You can produce essential oils, perfume or distilled water without a license.

Making ethanol at home for fuel use is also perfectly legal, as long as you have a TTB permit. Apparently, getting home fuel permits is not difficult, but TTB representatives can visit your premises to ensure you’re not consuming the so-called white lightning.

However, making moonshine for drinking is a whole different matter. According to federal laws, distilling alcohol at home is certainly illegal, no matter the amount.

In fact, bootlegging can lead to jail time for distilling alcohol and spirits at home. According to the federal law, operating home distilleries could see offenders hit with several federal charges, including tax evasion, which could lead to a maximum of 10 years in jail in addition to the seizure and forfeiture of the property and land used for the home distilling purposes.

Although many people know that making alcoholic beverages at home is prohibited, they don’t understand how and why these laws were adopted.

The law might seem absurd, but a glimpse into its history makes things much more understandable. Instead of the government warning you that you’ll become blind if you drink your homemade moonshine, limitations on the hooch actually revolve around taxes.

Things began to go downhill after the American Revolution when the government began to impose alcohol excise taxes in order to repay the war-caused debt. Farmers supplying the grain used in producing moonshine started protesting and the conflict eventually caused the Whiskey Rebellion, which threatened the stability of the budding United States and compelled President George Washington to lead a crackdown on moonshine making ventures.

During the Civil War, distilling moonshine or selling it and not paying taxes was declared illegal. Soon after, the Revenue Act of 1862 was passed. This bill officially levied excise taxes on alcohol and other “sin” items. This also included homemade spirits and it has been illegal to produce spirits at home ever since.

However, learning how to make moonshine has been a popular practice for a long time, especially in the southern states such as South Carolina, North Carolina, Tennessee, Kentucky and Virginia. But with the production or distribution of moonshine prohibited, moonshiners had no other option but to resort to bootlegging.

While you can now produce your own beer or wine for your own consumption, production of spirits for personal consumption is still prohibited. The reason? The excise tax many moonshiners dreaded is still too lucrative. So if you’re considering making moonshine, then get the proper permits. Otherwise, distilling at home can lead to some serious run-ins with the law.

Although the prohibition on home distillation seems like a hindrance at a time when craft booze is booming, federal governments say that that is designed to protect the consumers.

The government argues that the home distilling process is unsafe because of the potential to be contaminated with harmful heavy metal substances. These risks also include contaminating the product with methanol, which is said to cause blindness. Moreover, there’s the risk of the stills exploding.

While it is easy to buy the equipment necessary to make moonshines, TBB agents often carry out crackdowns on moonshiners in possession of unregistered stills. Suppliers often sell moonshine stills to beginners who are interested in making essential oils, perfumes or distilled water, which is perfectly within the law.

See our blog and click here to get more information on apple pie moonshine recipes and other distilling relate information.